Trustee Emily Hogge is spending six months on the ground in South Africa. She is providing monthly despatches exploring the impact our work is having on local communities in KwaZulu Natal and Cape Town. The first two reports can be found here http://www.zoetrust.org/life-in-ingwavuma/. This third report summarises some of her experiences over the past month.

Is 30 minutes revision enough?” This is a question I was asked a few weeks ago by a bright eyed Zoe Trust 14 year-old child as we sat down to revise natural sciences for the first time. I hope that his question may have changed slightly over the past month. Perhaps: “Is 6-8 hours revision enough?”

The past month has been dedicated to studying in the lead up to Khethani’s first ever yearly exams. For the past 6 years Khethani has been following the ACE curriculum which tests the children with end of topic tests throughout the year. At the beginning of 2015 Khethani changed to the South African National curriculum which has an end of year exam week. This historic week has been long anticipated by both the children and the staff. In preparation, I have been running study sessions with the Zoe Trust children where I help the children to create revision timetables, develop their study techniques and study in a focused and organised manner. In addition we share a meal together (hot dogs, chips, biscuits and fizzy drinks) much to the kids delight, share a word from the bible and play a fun game to relax. 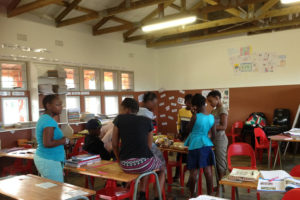 The overarching aim of these sessions has been to install a desire to study in our children. The culture in Ingwavuma is very different to the UK where students study for uninterrupted hours and days before an exam. This culture of revision is ingrained in children in the UK from a young age, who grow up knowing it is the norm. However this is not the case in Ingwavuma. Revision for exams is limited and brief. Only once you enter Grade 12, does revision start in earnest, but by then, few have acquired the skills needed to do well at matric.

Since starting my revision sessions, I have slowly seen the attitude of The Zoe Trust children change, not in all of them but in most. I am no longer directing and leading every second of study, instead they are asking me to focus on certain things, guiding my questioning and leading their own self-study. There are mumblings of studying happening at home, the children are completing end of topic tests and asking me to mark them, the focus is less (although still heavily) on the food and much more on what they are learning and getting out of each session. Alongside this shift in attitude the children are reaping the rewards of their hard work. I was delighted to hear ululations and singing coming from the Grade 5 classroom on Friday when the girls got their end of term four tests back. Sanele appeared in the doorway gleaming with delight as she showed me her Natural Science result of 92%. She was soon followed by the other girls who all showed improved results. For the girls to see so clearly the result of their hard work was fantastic. Overall all of our children did really well in their end of term tests and exams achieving some great results. Sadly, the exams have highlighted how those children who joined us at a later age, such as Sanele, Phila and Nontobeko, struggle with their basic understanding of English. They are going to have to work incredibly hard over months and years to improve their English, as all school exams are in English. 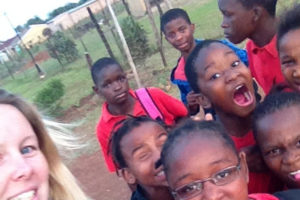 Personally it has been an incredibly interesting experience to re-enter the South African education system after a year learning and teaching in a British school. I have been dismayed when my children still don’t understand a concept after numerous repetitions of a method so easily understood in England. I have also been left standing awkwardly at the front of the classroom as my very English examples are lost on children who have never seen a drain, watched a movie in a cinema or travelled on an aeroplane. I have been baffled by how something so simple, that works in England, like a group discussion falls flat on its face in Ingwavuma.  The lack of creativity, discussion and thinking by the children has left me exasperated. I remember standing in front of the Grade 7’s in the first week enthusiastically trying to have a discussion whilst the students timidly raised their hands scared to argue against or talk over me or each other.

Zulu culture is extremely respectful, there is a clear age hierarchy where children are expected to hold their hands in a certain way when giving/receiving, greet their elders using specific language and complete certain tasks in respect of their sex, age and position in the family. This culture is ingrained and greatly influences their educational journey. In addition the behaviour management system in South Africa is very different to England. Listening to teachers barking numbers at children, awarding demerits for incorrect answers and detentions for not having stationary has left me angry and irritated. Overall the first few weeks were frustrating and I often found myself criticising the South African education system for its lack of fun, love and creativity.

As I have adapted to life in a South African classroom, I have noticed a shift in myself and my teaching. I have learnt to meet the kids half way. I revel in their deep rooted cultural respect of their teachers and peers and I use it to create a respectful classroom where the children feel safe and secure. I have embraced aspects of behaviour management alongside the English positive praise techniques, such as star of the week, to create a classroom where the children respect me due to a healthy balance of desire for positive praise and fear of punishment. Children don’t run around my classroom and they wouldn’t dare throw anything at me or refuse to do their work. Furthermore instead of despairing at the children’s desire to learn things by rote I have harnessed it to teach Talk for Writing, a fantastic writing framework that has greatly improved their English writing. In addition it has allowed me to move through the factual Grade 7 Geography teaching at speed leaving time to focus on their discussion and interpretation skills. I have pushed the children to question, to argue and to discuss without losing their respectful nature. I have helped the children to develop their creativity through stories, imagination games and drama whilst using their desire to write about their family to practice tenses and sentence structure.

Instead of becoming frustrated with the children’s obedience and fear to do anything without asking, including picking something up off the floor, I have learnt to use this to develop the children’s responsibility within the classroom, giving them jobs and responsibilities that demand organisation. I have recognised the fantastic learning opportunity for the older children, using them to oversee homework marking, supervising lining up after break times and overseeing my class with the younger children whilst I am busy. I have opened my eyes to the positive characteristics of the structured and strict nature of their schooling – organisation, respect and responsibility. As a result whilst trying to pour out love, praise and encouragement in my classroom, I have begun to demand organisation, speed and self-awareness. Over time my classroom is becoming a tight mesh of ideas from Britain intertwined with the principles, practices and cultural norms of Ingwavuma life.

The questions surrounding education are diverse and complex. I hope to return to these questions, delving deeper into the power of different educational methods and ideas for innovation in the classroom in a few months once I have consolidated some of my experimentation.