We went, together with Zac, our son and Laura’s husband,  to Ingwavuma to help celebrate the opening of the Zoe House for orphans, which the Zoe Trust paid for, and to visit the children, teachers and carers we support.

In a fold of dusty hills spotted with acacia and baobab and the thatched round huts they call rondavels, in the northeast corner of Kwazulu Natal (KZN), we dodged as many potholes as we could, and swerved again to avoid cattle herded by small boys. At Inguavuma we drove into the gated compound of the Zizise Educational Trust which runs an orphanage, a crèche and a library, and directs social workers to visit assisted children in remote places.

They work against heavy odds. KZN has had the highest HIV infection rate in South Africa. Igwavuma, the country’s second-poorest municipality, has been marginalised by education and development. Water comes sporadically from unreliable springs. Most people live on basic welfare grants.

We found Hlengiwe, who directs Zizise in general and the orphanage in particular,

Bridget, the general manager, her husband Andrew who is headmaster of Khethani school where we support ten children, all doing a fantastic job with total dedication. 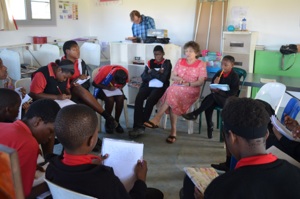 If you ask Bridget or Hlengiwe a question about any of the Zoe Trust kids, instantly they will be able to relay their entire history up to the present day, including their favourite school subjects, where they need to improve and what their career prospects are. It’s impressive.

We met Zoe Trust children and families. Lindo, now 16, lives with his aunty and his younger brother and is supported by the Trust as a member of a child headed family. Funds pay for food packages and for a woman to help with cleaning, as the auntie is in ill health. We found Lindo in good health and flourishing at a government school. His grades are good and, unusually for a child at a government school in KZN, his English grades are as good as his Zulu ones. He has ambitions to become a dentist but Bridget sees him as a future journalist or teacher.

Zac and Laura took a trip to Durban to visit Nomvula Gumede who won a scholarship to the top-class boardig school there, where she is thriving.

Back in Ingwavuma, Dorothy and Laura ran a creative workshop with some of the older children, which included some Zoe Trust children – Slindi, Sanele and Lethu. From the short time they spent with them and from the questions asked of the teachers, all three of them seem to be doing well at the school. They were all a little shy, especially the girls, but they contributed to the class and you would not have known from their appearance or ability that they were from different backgrounds to their middle class schoolmates.

Bridget recommends children for Khethani sponsorship based on a combination of criteria – they will usually be bright and show some promise but most importantly, they need to have the right support network at home. Laura discussed this issue with Nikki Lee, one of Zizise’s founders and trustees. Nikki said she would not align Zizise directly with the excellent Kethani school because she feels the focus should be on raising the bar of education overall rather than focusing on developing an elite in the community. Laura agreed that the standard of education generally should be raised and that all kids should be given a chance to learn, but this will take a long time to achieve. Meanwhile Laura agreed with Bridget and Andrew that it was a worthwhile endeavor to take some of the most promising kids from underprivileged backgrounds and give them a shot at the best possible education. 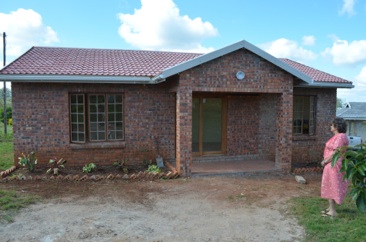 Indeed, as you look around the community you can already see how this little school is having a huge impact on the community. It employs teachers who can support their families, building new homes and providing food. The school is bringing an educated and skilled workforce into the area such as teachers, nurses and doctors whose children now have a place to study. In addition the school is setting the standards for the local community with teachers and students starting to realise they deserve more than the education they are receiving – this was highlighted dramatically during our visit when the pupils at a local high school went on strike, which forced the resignation of a corrupt head teacher.

We visited the Ngwenya family, living in three wooden huts a little way out of town, whom Zac and Laura had met when they were in Ingwavuma two years ago. At that time the three girls and two boys had a problem with their father who lived nearby and was stealing their Zizise/Zoe Trust food packages. That is no longer happening and the kids were all well fed and happy. Their vegetable garden, just started two years ago, is now well established and maintained and the kids are well fed and have plenty of energy.

However another problem has arisen:  one of the 15-year-old girls is five months pregnant.  Laura’s worry is that unlike Lindo who has career prospects, or like the Ntimbane family who have an older sibling at university, it is not clear who will take responsibility for the long term here. It looks as if they may rely for a long time on help from Zisize. Following our trip the board of trustees decided that The Zoe Trust needs to work with Zisize to make sure that the families we are supporting have a plan for the future – ideally through further education.

We were guests of honour at the inauguration of the Zoe House, a brick bungalow built for six orphans, intended to be the first of four similar houses in the Ekukhanyeni orphanage. The ornate door plaque they made ready for the occasion says: “Zoe Sarojini Schwarz. She loved children and taught them to be brave.”

The orphanage inauguration party was in Hlengiwe’s house, a fine red brick bungalow in a tropical garden, right next to the Zoe House. The children sang soulful  Zulu songs for us and gave an impressive account of themselves in English.

There is currently no funding in the pipeline for the remaining houses, but it will continue to be a focus for Laura’s own fundraising through her PR company, Shine, and her ambition, together with that of the other trustees, is to raise funds for another house by the end of the year. 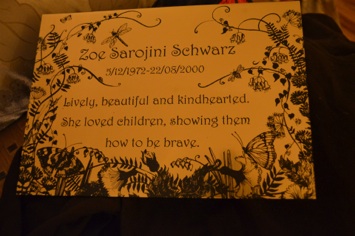 Hlengiwe, co-founder and director of the Zisize Trust, the boss of everything, is a matriarchal figure who commands hushed respect from the children, affection too because they see the twinkle in her eye. She was principal of the local primary school when “kids were starving, there were no classrooms, no materials, we taught under trees,” she told us. “They walked up to two hours to school and two hours back, fell asleep in class….” What concerned her even more were the un-enrolled children outside, sleeping rough under trees in her compound. A boy aged 8 was eating from dustbins.  “We got an NGO to build a house of sticks and stones inside the school grounds, with teachers contributing. It got bigger and bigger as more kids came and that was the start of the orphanage in 2008. It needed me to resign from the school to work full-time on the rescue and care of the outside kids. Friends with good contacts here and abroad raised donations. We started a private school because there was no decent public education. “

It was clear to us that Hlengwe and Zizise are not only throwing these kids a lifeline, but that they are providing them with the self-belief and tools to build their own futures.