On Wednesday 13th March at 7am the chatter of voices and whirring of tires could be heard outside the library, as distant splashes rang out from the pool and the first murmur of pounding feet emanated around the Bath university campus. The challenge had been set, the goal was clear and the next 18 hours would determine the outcome. As the early risers climbed off the bus or stumbled out off their houses looks of confusion spread across their faces as a red blur disappeared around the corner and a red glow lit up the library. For the triathlon team it was the start of what was to be an immense challenge.

17 hours and 30 minutes later the last pedal stroke was turned amidst cheers and cries of satisfaction – the challenge was complete! Tired bodies collapsed onto the floor, smiles broke out across their faces and laughter and singing emanated around the dark and cold campus. 79.1km swum in the pool, 913km run and over 3240km cycled – the challenge had been smashed, an incredible achievement!!

All 50 of the triathletes who took part gave 100% pushing themselves to the limit. They all went way beyond the call of duty. It was incredible to watch, to witness the determination and commitment of the human mind and body. It was remarkable to feel the sense of loyalty and dedication to the cause – to see the belief and hear the excitement about the work of The Zoe Trust and share in people’s enthusiasm for the future of our children.

There were some remarkable efforts; Dan Thorby completed an IronMan triathlon and Mary Bird ¾ of an IronMan in around 14 hours – they are true heroes, both so close to breaking point yet determined to fight on.  Some other fantastic efforts were by Daniel Moorland, Lucy Harvey and Joshua Doran who completed their first Olympic distance triathlons. But I wish I could mention every one of the triathletes who took part because they were all amazing and showed such determination and courage.

I could not be more proud of the Bath University Triathlon Team; I have never seen guys so close to tears, so close to breaking point, I have never witnessed so much pain. I was humbled by the day, left speechless – a happy witness. 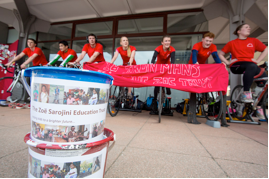 With £3302.35 currently raised and more still being donated it has been an extremely successful challenge. But more than the money it was so exciting to see people pushing themselves to the limit for a great cause, to hear the triumphant tales and stories of the day – to see the pleasure and the pride of the athletes. Watching people enjoy getting involved in the work that we are doing was wonderful and I hope that in the future they will remember The Zoe Trust name and come and join us in our fight to give our children a brighter future.

On behalf of the Zoe Trust I would like to say a huge heartfelt THANK YOU to everyone who took part, our wonderful supporters and to everyone who dug deep and sponsored us. Also thank you to the Bath University Student Union for their support and help. The money we have raised really will change lives!!