Aim: For the triathlon team to cycle across South Africa 1706km, to run the length of England 510km and swim the channel 34km on Bath University Campus.

On Wednesday 25th April at 7am with the rain pouring down, the wind howling through Bath University and the majority of students tucked up in bed a couple of loan runners headed out around the campus paths, pedals began to turn outside the library and distant splashes were heard as a few early morning swimmers dived into the pool. For onlookers it looked crazy, orange blurs running through the mist, an orange glow outside the library but for the triathlon team it was the start of what was to be a huge challenge. 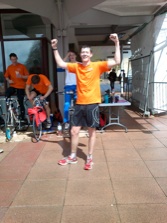 11 hours and 49 minutes later the last runner finished and the final pedal stroke was made as cheers and cries of satisfaction could be heard around the university. Tired bodies collapsed onto the floor, smiles broke out across tired faces and laughter emanated around the dull and dreary campus. 1706km covered on the bikes, 510km run on the roads and 34km swum in the pool – one challenge well and truly completed! 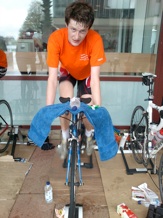 All 24 of the triathletes who took part are heroes; they all pushed themselves to the limits – went way beyond the call of duty. It was incredible to watch, to witness the determination and commitment of the human mind and body. It was remarkable to feel the sense of loyalty and dedication to the cause – to see the belief and hear the excitement about the work of The Zoe Trust and share in people’s enthusiasm for the future of the orphanage.

Some of the most remarkable efforts where by Felix Young and Rob O’loughlin who ran a marathon in the morning in 4:30 and 3:30 respectively and then after a quick lunch break covered 180km on the bike in about 6 hours. They are true heroes – both guys suffered a lot and were very close to breaking point. Other great efforts were by James Egerton who swam 1km, cycled 150km and ran 30km and Bethan Rhodes who swam an amazing 10km. But every single one of the triathletes pushed themselves beyond the call of duty and if I could I would list them all. 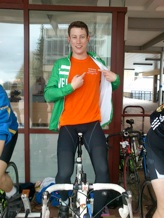 I could not be more proud of the Bath University Triathlon Team; I have never seen guys so close to tears, so close to breaking point, I have never witnessed so much pain. I was humbled by the day, left speechless – a happy witness. I was not alone reading the comments left on Just Giving shows just how inspirational these guys were.

With £1670.40 currently raised with more money still being donated it has been a successful challenge. But more than the money it was so exciting to see people pushing themselves to the limit for a great cause, to hear the triumphant tales and stories of the day – to see the pleasure and the pride of the athletes. Watching people enjoy getting involved in the work that we are doing was wonderful and I hope that in the future they will remember The Zoe Trust name and come and join us in our fight to give children a brighter future.