We launched the trust at Tanya and Niall’s home on the second Friday in January – the coldest winter for a generation. (Exceptional weather – exceptional event?) Many of those invited guests, family, friends, sponsors, well wishers had to cancel because of the conditions. But Tanya who is a forge-ahead person wanted to launch anyway and so we did.

Tanya’s West Hampstead  flat is spacious with wooden floors and many African artefacts. Julia Hobsbawm, Zoe’s cousin and one of our three patrons had brought along a poster of Zoe  as a vibrant young school girl. We stood it up under the mantel piece where the wooden statue of Nelson Mandela, it seemed to me, looked down with his infectious smile in approval.

As Zoe’s Mum, it was heart warming to have her four surviving siblings here except that Ben, Zoe’s elder brother who,  prevented  from attending because Euro star was advising its customers not to travel from Paris,  he had a partial presence since Niall set up a video link. ‘The technology isn’t perfect yet.’ said Ben, ‘but it was fun all the same.’  And the immediate family has a welcome  addition –  Laura Burch, Zac’s  partner,  already loved by all of us  I had the rueful thought after the presentation when everyone was chatting animatedly how much Zoe would have enjoyed the party. The other missing trustee was   Sarojini Vittatchi . Zoe’s godmother and a trustee who lives in Bangalore .

The second of our three patrons arrived later on. Helena Kennedy knew Zoe as a child.  How generous  of such a busy person to give her time. She and Ian Hutchinson have both donated to the trust. Ian who runs the trust Saving Faces, a charity devoted to research in facial surgery  (www.savingfaces.co.uk/) had a lot of good advice on running a charity.

Two of Zoe’s closest friends came to the launch. Mylene Sylvestre, who is a trustee and Kelly O’Reilly. Kelly has also agreed to become a trustee. Something that Zoe would be so pleased about. 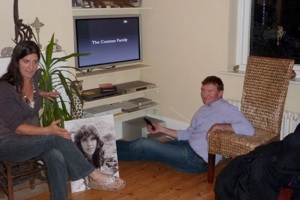 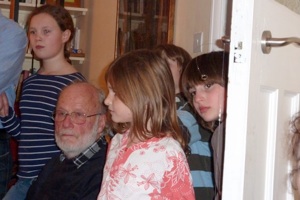 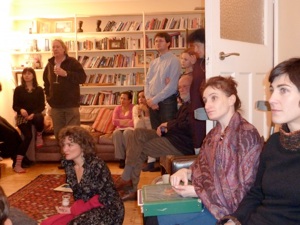 Tanya, instigator of the trust, presented a film that Niall made from their visit to KwaZulu Natal. She told us how the idea had come to her. Thinking about issues that mattered to her; her sister’s death; the lack of opportunities for so many children in South Africa. She had the brilliant idea of combining both and the trust was born last November. So far, we have contacted people who knew Zoe, family and close friends. There has been a good response. So many people, of course, are already giving as much to charity as they feel they can afford but we are hoping that our small endeavour will gain adherents because it  voluntary nature with no paid employees will appeal to people especially when they see the evidence of the girls with their own eyes. Tanya hopes that sponsors will develop a relationship with the girls they sponsor. And with that in mind, she will try to match donors and children who share some common interests. One of the girls we want to sponsor wishes to study nursing.  Will a nurse sponsor her?

When I have talked to some people about the trust, they’ve objected: ‘but if you help one what about the others?’  We discard this objection. A journey starts with a single step.

One of the well wishers at the launch was VI Wagner. a South African of mixed ancestry which includes Zulu forbears.  She has personal experience of helping young people in rural areas out of poverty. We both agreed that even if not every case is successful, the endeavour is worthwhile.

The trust at the moment offers two models of help. You can give money directly to a family who is suffering hardship or you can enable a particular child with ability to get a better education. In the former case Tanya showed us the single room hut where 15 year old Sibo cares for his sick uncle and also tries to get himself and his two sisters to school a two-mile walk in each direction.

The Coetzee family, who with 2 biological children plan to add onto their family of 14 and adopt twenty children. They believe, and it seems so logical to me, that living in family not an orphanage gives a child a tremendous advantage for the rest of his or her life. It was poignant to see the confidence of their small adopted children and contrast that with the sad expressions of some other children.

Zoe’s uncle Eric Hobsbawm who’s now in his 90s, with Marlene his wife and Wal’s sister, braved the cold and gave us a donation as did Andy Hobsbawm her cousin. Simon Hamilton also contributed most generously.  Wal’s brother’s children were not able to come to the event, but kindly sent a generous contribution by post. Overall £1,300 was raised on the night. The other guests have all chosen to sponsor a child and are busy setting up direct debits. Tanya was surrounded by many close friends, Lea, Vanessa, Naomi, Kim and Barbara. Julia’s small kids Roman and Noushka aged 8 and 11 donated generously from their pocket money.

The evening finished with a bowl of Tanya’s delicious vegetable soup. The general feeling was that we were well and truly launched. Our income of promised sponsorship has reached £450 a month and we  are now able to apply for charitable status.

Much  of the material in the presentation is already on the website www. Zoetrust.org but if anyone reading this blog would like to see the whole DVD which lasts 20 minutes, please let me know and I will arrange for them to have a copy.

Zoe has a short life with held wonderful moments and suffered a tragic end, I hope that we felt  at the launch that through Tanya’s initiative in founding an educational trust that we’d found a way to commemorate her  that was  positive and fulfilling for everyone concerned. So thank you everyone who attended and we will keep in touch.